Today was Day 3 of working out. It's been a while, but I'm finally hitting the gym again. Last night, one of the trainers stopped me and said he was glad to see me again. He'd noticed I hadn't been there for a few weeks. I smiled sheepishly and said that I'd been a slacker and that if Ricky could see what kind of shape I was in now, he'd kill me. Lifted for the first time in months yesterday. It was legs, and I don't feel to badly today. I did arms and back today, and I know I'll feel it tomorrow. Hell, my arms feel weak right now.

Here are a few pictures from my trip. I was only going to put a few, but it makes me so happy looking through them, that I added more than I anticipated. It was such a wonderful vacation and I'm looking forward to our next one. :) 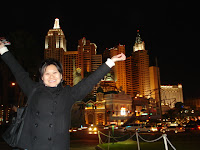 Me, outside of New York, New York. 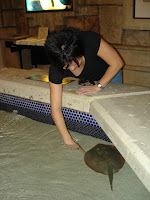 This was at the Shark Reef in Mandalay Bay. JP wasn't much into touching an animal that had killed the Crocodile Hunter... Now I can say I've pet a shark and a Sting Ray. 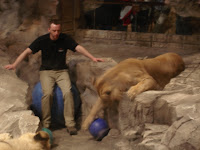 I can't say this is a job I would want. This is at MGM Grand. Two guys were inside, playing ball with two, very large, lions. The were so much like little kittens playing... except for the sharp teeth and big paws thing. 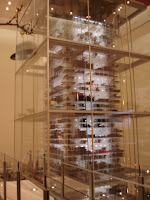 Best wine cellar. Ever. My guess is the most expensive wines are at the top. The servers literally strap themselves in and use the pulleys to get to the level of wine they need. 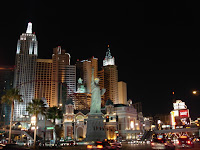 A beautiful shot of the city at night. It was an amazing sight and a wonderful place for our first vacation together.
Posted by sunshine at 9:28 PM

You look cold in the first picture, Sunshine. Awesome pics!