I've been waiting to post so I could throw up some pictures, but I just keep delaying it longer and longer. Anyway, here's a quick (personal pictureless) update on me.

Last weekend, JP and I went up to Petosky, MI for a friend's wedding. It was really cold, but the 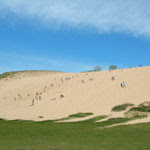 wedding was beautiful and our friends were the happiest couple in the world. We spent two nights there and then went over to Traverse City so I could show JP some of my childhood vacation spots. We climbed the Sleeping Bear Sand Dunes, about 3 miles round trip, and played on the beach of Lake Michigan. It wasn't exactly what JP was expecting (climbing mountains of sand for 3 hours), but we had a really good time. I'll add our pictures soon. Seriously, see how little all those people look! It's quite a hike, but I think well worth it. Oh yeah, wondering how JP's ankle held up? Well, he decided this was the weekend he was taking himself off of the walking cast. I was nervous, but he did fine and it didn't hurt... anymore than usual. :) During our 3 hour hike, we had plenty of time to talk. We both thought when we first started dating that we were going to be the adventure couple -- running, soccer, cycling, etc. since we were both big into those types of things. We haven't really become that, but we both want to. So, we rededicated our relationship to be the fun, adventurous type. Can you just decided that? We'll see. :)
I've been running and actually decided to join a relay team for the Detroit Marathon. I was super excited and thought this would be really good for me. But... the girl pulling together the team didn't realize registration had closed for relay teams. She proposed we all run the half together, but I haven't been training and I know I wouldn't be happy to do it "just for fun." Come on, running races isn't for fun! :) Anyway, still working out on my own, but I realized I need to pick at least a 5k to work towards. 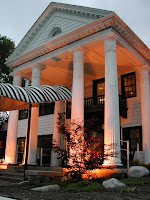 This weekend was low-key but nice. We went to a really great resturant with some friends on Saturday night. It's an old mansion turned Japanese and French resturant. What a combo, huh? I've been wanting to try it out for a few years, but I never think of it when we are trying to find a place for dinner. Excelent atmosphere, pretty good sushi and fun with friends. That was really the highlight, but I don't mind after a few crazy busy weekends.

Heading to Dallas tomorrow night for work.... here I come Texas State Fair! :)
Posted by sunshine at 10:20 AM