Status: In a Relationship (Really)

So. Valentine's Day. A holiday I don't normally celebrate. In fact, it's usually either a.) just another day, b.) just another day to remind me that there are millions of people in the world that are in love... and I'm not one of them, or c.) a good day to drink. This year was different. Not that I need a silly holiday to make me feel respectable that I'm not flying solo, but it was nice to actually have someone on this once hated holiday. It's been more years than I care to share since I've actually been in a relationship on Feb. 14.

Since both JP and I didn't brave the roads yesterday, we were both working from home. Mid-afternoon the roads were better and I decided to go over and surprise him. I got dressed up (I wore a skirt on a day when I could have been in sweats all day. If that's not love, I don't know what is.), ordered lunch, picked it up and headed to his house. I felt guilty for a nano-second for going to my boyfriends, but not the office. Okay, actually a bit longer.
So there I was, all decked out and bearing food. He opened the door and I wish I had a camera to capture his reaction. It actually took a second for the look of confusion to hit his face because he was so shocked. He was actually expecting the maintenance guys. He said it was like the movies -- he started looking at my shoes, working his way up. His first thought was, "what kind of a maintenance guy wears high-heeled boots?"
I was so excited to surprise him! We had lunch and then we both jumped back on our laptops to continue working for the day. It was nice being able to at least be in the same room. Now, like I said, I don't usually celebrate Valentine's Day. And, I find it silly to buy flowers that were 10x cheaper the previous day. But, he surprised me with a beautiful basket of flowers and took me out to dinner. Our seats were close enough to the bar, so we were both watching the Piston's game. Suddenly he looked at me and said, "You're the best girlfriend ever. It's Valentine's Day and you're more glued to the game than me." That being said, we had a very nice first Valentine's Day together. :) 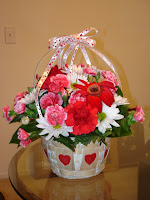 awww!! very cool what you did showing up in skirt with lunch - and funny what he said about the maintenance guy LOL. love IS grand!

I love it! You sound so happy!