If I see one more moving box...

It's been an interesting last couple of weeks. Dont' worry, it'll be the short version.

Two weeks ago Monday night, JP's townhouse flooded and the ceiling fell in. No one was hurt, but they lost nearly everything. It was a HUGE mess and lots of long nights and early mornings! The worst part was that we had to go through everything to see what we could salvage and what we had to leave there. Here's a look at it shortly after it all happened: 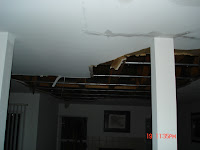 JP moved that Friday -- For a lot of things being ruined, he sure had a lot of stuff to move. :) It's been difficult unpacking because we're still trying to figure out what is okay and what's ruined completely. And, he has an odd mix of things since he and his brother needed to split things up. Example: He has six spoons, but only two forks. He has the complete set of glasses and plates, but no pots and pans (or any cooking utensil for that matter) to cook.
I moved that Saturday -- It's the first time I've ever lived by myself. So far, so good. I haven't unpacked everything yet, but all in good time. JP has been traveling a lot, so I've been trying to help him on the weekends so I can do my place after work. My commute to work is shorter, so that is definitely a major plus! It's a good size, has a nice kitchen, a full size washer and dryer (this was my deal breaker) and a balcony overlooking a pond. Everyone told me that I was going to love being on my own, but I was hesitant. The morning I picked up my keys, I went to take a look at my new apartment before all the craziness of the move started. When I went in, I had the weirdest feeling and a smile... this was going to be my own place. We'll see how it goes.
JP's brother and his girlfriend moved to Chicago on that Sunday. There was a horrible ice storm, so I was (secretly) a little pleased that we didn't need to go to help. And, if you're keeping count that's three moves in three days. They sent pictures of their new digs -- a simply gorgeous condo on Michigan Ave. Did I tell you how cute my new place is? :)
Anyway, both JP and I are on the road this week for work so no unpacking will be taking place until the weekend. (And, I'm sure you can figure out how much running I have (not) been doing. Lots more has been going on, but I'll save that for later.
Posted by sunshine at 9:07 PM

I feel for you. I've moved enough times in my life to detest it by now. I'm sure you will be all unpacked in no time.

WOW! You really went through a mess. I am moving too so I know your pain. Good luck on the unpacking.

I actually like moving and I don't think I could have dealt with all of that!