Let me start this blog entry by saying that I am in full support of those that need a psychologist and the psychologists that are able to help them. That said, the psych eval that I went to yesterday was A COMPLETE WASTE OF TIME.
When I arrived, I was taken into a small room with a desk to take a questionnaire. A 576-true/false questionnaire. Going in with an open mind, I tried to over look that this was going to take me forever. Some of the questions I could completely see being a part of the evaluation. Questions related to alcohol use, if I've considered harming myself, etc. Some of the CRAZY questions include, "I think someone is trying to take control of my mind", "I see people or animals that no one else can see", "I have a fear of dirt." Yes. Those were really on the form. (I started thinking though. If I really did see people that weren't there, would I actually admit it on a true or false scantron?)
Then my psychologist came in the room. I thought he would be friendly, try to build a repoire with me, etc. Nope. He came in with a legal pad and started with a constant stream of questions. He asked the typical questions - relationship with family, friends, boyfriend; how I liked high school and college; how I like work; etc.
He got to the question of when the pain started. I replied it started 2 years ago. He asked if I've had any medical problems within the two years. Okay. Did you not read my file. Yes, I had my freaking abdomen sliced open. He asked for a few details, and I said that I had went to the ER in the middle of the night and had to have surgery that day. Now, I'm no expert but if there was something in my past that could be causing me stress couldn't it be the fact that I had a pretty tramatic heath issue? Apparently not because he barely flinched and went back to asking me questions about my relationship with my parents. Were their expectations to high? I guess it's more likely that I'm in pain because my parents were mean to me when I was 6-years-old instead of having a major surgery.

In what I thought was the middle of our conversation, he suggested I go to a few sessions with someone, "because it can help to talk to someone about life and what's on my mind." Yeah. I'm thinking no.
After pressing him for more details (like why he thinks this is the course to go), he said that he can usually tell right away what is bothering someone but couldn't with me. Hmmm, maybe because it isn't in my head. He basicaly said that he thinks it is good to be driven, but that I may be a perfectionist and putting too much stress on myself. Of course I'm driven, I call that being successful. I have a good job, I'm good at what I do, I have a strong support system and I work hard to be physically pit. Of course, marathon runners are their own kind that non-runners don't always understand, but that doesn't mean that I'm a perfectionist. 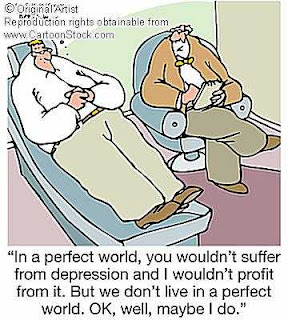 I have another doctor's appointment (like a real medical doctor) next week, so we'll see how that goes.
On a more normal note, I ran between 4-5 miles yesterday afternoon. The weather is actually the perfect temp and it was nice to be outside. Today I ended up working out with a trainer at the gym. I barely lasted 30 mintues before I thought I was going to pass out. I'm so not in shape yet. Gotta keep working to get back into it. Oh wait, is that me trying to be a perfectionist and reach unrealistic goals...? :)
Posted by sunshine at 7:31 PM

Great job on getting a run in! I hope it goes well with you new dr.

I'm sorry! When I first was trying to figure out what was wrong with me, they tried to send me to a psychologist. I insisted it wasn't in my head, and I was right. I think it is great that people who need help can get it, but if my problem (and yours) is not in my head, how in the world can it help to talk about it?!?

Good luck! I have lots of sympathy for you in this!