Key West was freaking awesome!
We left Thursday morning and landed early afternoon in Miami. Instantly, we were all in a good mood -- sunshine, palm trees and warm weather. I thought the four hour drive to the Keys was going to be painful, but it went by pretty quickly. I think it was a combo of being excited to get down there and the beautiful scenery.
Thursday night we explored the infamous "Duvall Street" - and decided to partake in the "Duvall Street Crawl". The boys had their bachelor party and the three girls that were there had our own fun. If you haven't been to Key West before, let me just say three things: 1) Open containers are legal, 2) strip clubs go completely nude (so I was told!) and 3) the bars don't close until 4 a.m. Needless to say, I think the boys had a good time. :) 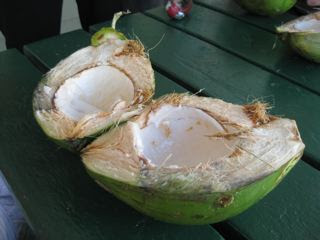 Friday we spent a lot of the time helping with wedding stuff. But the highlight of the day for me was that I had a coconut for the first time. We pulled up to a red light and I looked over at a corner store. There were coconuts pilled up with straws in it. I jumped out of the car (JP wasn't quite sure what I was doing) and ran over to the store.

They drilled a hole in it first and stuck a straw in it. After I drank all the "coconut water" we took it back and this crazy (and I'm pretty sure intoxicated) man chopped it open with an axe. It didn't taste quite like I thought it was going to... and I didn't like the texture... too slimy for me. Everyone asked me what I thought it was going to taste like. Like... coconut... Fresh coconut taste nothing like the dried sugary stuff you buy in the store.

Saturday some of us got an afternoon at the pool (JP was busy with his best man duties). It was 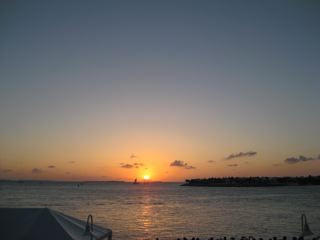 fabulous!!!!! Bikini, sunshine, relaxing pool and alcohol. Doesn't get much better than that! :)
The wedding was at the Westin resort, on a pier, overlooking the ocean, at sunset. BEAUTIFUL!
Everything went smoothly and it was so nice meeting more of JP's family. We got along so well and everyone had a wonderful time.
Love was in the air and... everyone was bombarding JP with questions of when we were getting married. I even learned that his office has a pool going. Poor guy. No pressure there, right? :)
Sunday we had a nice breakfast with some of JP's family and drove back up to Miami. We spent the night in South Beach. We had dinner at an authentic Haitian resturant that JP and his family goes to everytime they're in Miami. It was so good! We were both so tired that we didn't explore the night life... it's bad, I know. But after so many late nights we pretty much passed out around 10 p.m.
We did get up early on Monday morning and went for a walk on the beach. The water was freezing so we only put our feet in. From there we got ready and headed to the airport. Not the laying on the beach all week vacation we were hoping for, but it was still a great getaway.
Tuesday I flew out to D.C. for work (landed a few hours before the Pope. Ever see a long line of priests go through security?) and on Wednesday, JP flew out to Phoenix. So, we've both been seeing a lot of the airport lately.
Absolutly no running since my race, but plan on getting back into it this weekend. Gotta work off all this alcohol and rich food I've been consuming lately... :)
Posted by sunshine at 11:01 PM