It was a beautiful wedding and we had such a fun weekend.

Friday morning, JP and I headed across the state so I could meet up with the girls for a group mani/pedi. We went to one of those school salons, which I had never done before. JP didn't think it was a good idea, but I told him it would be fine and much cheaper. Well, it was cheaper, but it wasn't the best job. The bride's looked good though, so I gues mine don't matter too much. The other two bridesmaids didn't say anything to me, so I was kinda dreading spending time with them for the rest of the weekend. Everything was all set up, so I headed back to the hotel to grab a quick snack with JP and get ready for rehearsal and rehearsal dinner.
Rehearsal was COLD! We were all wrapped up in our coats, praying it would be warmer the next day. Afterwards, the dinner was lovely. It was located in the little downtown, in what was once a piano factory. Very cool. Of course, the two bitchy bridesmaids didn't introduce themselves to JP and didn't introduce their significant others to us. Grrr... We did get to know the best man and his wife, who live overseas. We hit it off with them right away.
Saturday morning, we met and spent the morning primping and 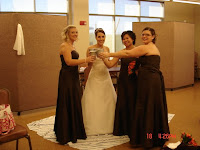 making sure everything was ready to go. The bride was in great spirits, not nervous at all. We did some photos and then just had to wait. About ten minutes before walking down the aisle, we popped open the champagne and toasted the new bride. All of a sudden, it hit her. Nerves took over and we weren't sure her legs were going to hold her up.

The ceremony was beautiful, the park was gorgeous and the 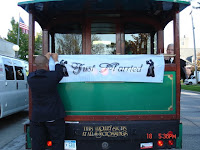 weather was sunny and not too cold. Surpisingly, I got a little emotional. Afterwards, we hopped on a trolley and toured the town and went to take pictures down by the beach. BEAUTIFUL!
The reception was tons of fun. The grooms parents were having the time of their lives, we were doing shots at the bar with the brides entire family -- including grandpa (who I couldn't keep up with, by the way), and the music was really good. The night was so much fun that when the reception ended at 11:30 pm, the new couple weren't ready to call it a night. So, a small group of us extended the reception to a local bar. It was perfect because it was empty, so we had it all to ourselves, and there was a live band. I took on the responsibility of getting the bride and groom to their hotel room safely, so I didn't drink so much. The others... not so much...
Let's just say the bride, best man, grooms father and JP were still drunk when they woke up Sunday morning. Not so great when we have to be at the brides family for brunch. We were all a little rough, and nothing fixes that like some spiked coffee and cheesy hashbrowns! :)
Since the best man and his wife live overseas, all he wanted to do while he was in town was watch some American footall. And, since we hadn't had enough to drink all weekend, we decided to meet up with them, on our side of the state, to watch football and... drink some more. GREAT weekend and I was actually physically sore from all the fun we had!!!
In Texas this week, so more on my great adventures later. :)
Posted by sunshine at 12:25 AM

Glad it was such a nice wedding!

Sounds like a great time, except for the weather being a bit chilly.

Sounds like you had a great time even though those bridesmaids were behaving like 2 year old brats. What's up with that anyway? I like the pic of your girls toasting-very cute.