I've been working hard since I got to Vegas on Thursday and I'm glad to say I'm just about finished. The events for tonight are finished and I only have a few small things to do tomorrow before I head home. What have I been doing since I got here? Well... 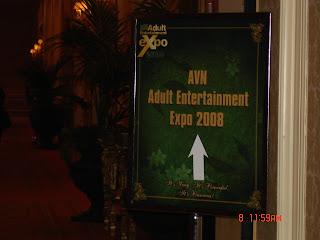 Just kidding! I'm in Vegas for the Consumer Electronic Show. The largest trade show in the world! I wish I could tell all about the cool, up and coming gadgets but the truth is I never had time to walk the floor. In fact, since I arrived on Thursday morning, I've only been outside of my hotel twice. I know that's very sad, but it's the truth. We were based in the Venetian and another site outside of the Las Vegas convention center, which other people worried about while I worried about everything at the hotel. It'll be nice to see real daylight tomorrow, instead of the fake sky in the casino! :)

The "other convention" as it's affectionately named, was always at the same time as CES. However, the geeks apparently weren't comfortable with it and complained so it was moved to another location (plus, the hotel space wasn't large enough to handle the ever growing expo) and pushed back a few days. Now, it only overlaps the last few days of CES.

I asked a bartender what the craziest thing he's seen during AEE. He smiled and said it was too vulgar to repeat. I also was talking about it with a hotel manager and he said that some things are a little out there, but some things aren't that crazy. They do have robes at the enterances of their hotel so those without enough clothing in the appropriate places can enter. Hmmm... can you imagine being told that you are too scantly clad to walk through a Vegas hotel and casino!

Well, it's only 8 p.m. here, but I think I'm going to pack up my stuff and go to bed! I'm sleep deprived and over caffinated. Good night!!!

Be careful, and have some fun! Vegas is cool. I loved walking around looking at all the lights. I know I'm a dud. That's some serious cash on using a gym for a day. wow!

Have a safe trip and try not to hang out with the nerds too much. :-)